The Jumping Table – Recipes My Amah Taught Me

The Jumping Table – Recipes My Amah Taught Me

I was lucky to have an amah as company when I was growing up in Singapore.  She was fiercely loyal, insanely protective and cooked like a Michelin-star chef. She had come from Shunde, China, in the 1950s, as life was hard there then.

The Shunde women who travelled to Singapore were mostly illiterate. They were helped largely through the recommendations of friends who had come earlier, and found work mainly as domestic help. They worked and lived with their employers, with certain days off a month. These women came to be known affectionately as “amah” (“mother” in Cantonese) for their devotion. An amah usually stayed with one family for life until retirement, becoming a respected family member, and, in some cases, a de facto matriarch.

As amahs took a formal vow of singlehood, they remained unmarried through life. However, they formed strong bonds with their peers, and quite commonly shared an accommodation where they could congregate during their days off. What leisure hours they had would be spent at the professional letter-writers who read and wrote their mail from home in China. They would also catch up and gossip with other amahs and, most importantly, they would cook up a Shunde feast to “cure” their homesickness. 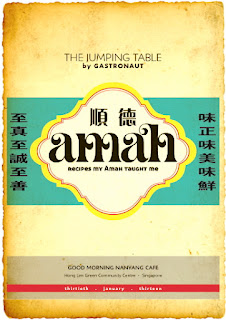 I have vivid memories of the amah who helped raise me. She liked to keep herself busy, and was always casting around for things to do in the house. I remember how she would buy cloth to make covers for everything -- furniture, appliances – and how she used a string to meticulously take measurements and cut the cloth.

I was a mischievous kid and always got into trouble, so she used food to distract me.  Which turned out to be a good thing. I would help her prepare snacks to be eaten while watching afternoon matinees on TV; and it was from her, that I learned Shunde cooking. For the most recent session of my new project, The Jumping Table, I cooked a Shunde dinner for my friends, with dishes I ate as a child. I’ve adapted some recipes to suit the ingredients available in Singapore -- but the techniques remain the same ones I learned from my amah. 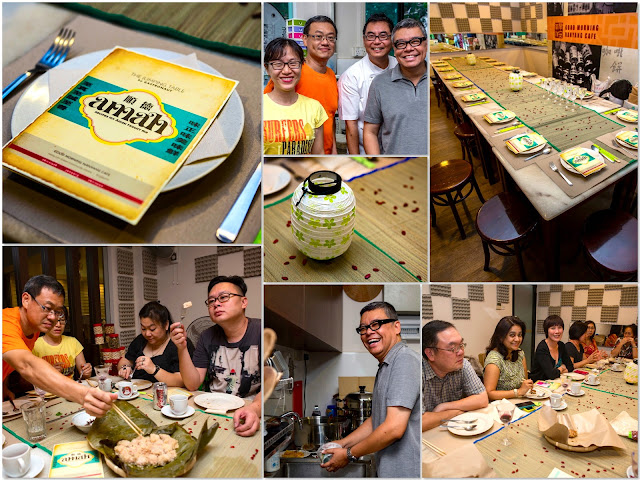 Cordyceps, Dried Figs & Kumquat Drink/天地遍黄金
For the welcome drink, dried figs, kumquat and brown sugar were boiled to extract the sweetness. I added cordyceps 10 minutes before the drink was ready. Cordyceps is believed to possess anticancer properties and also acts as an anti-depressant agent.

Fried Spicy Cashew Nuts/花落再重生
Fresh cashew nuts is marinated overnight, boiled, and fried until crispy. It was a snack for the family and visitors. 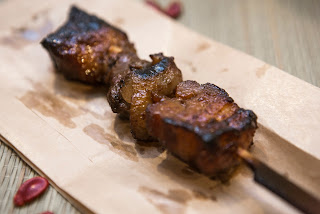 Roast Meat with Crystal Lard/凤干金钱鸡
Curing fat is an ancient skill, yet the knowledge to do it has mostly vanished from Singapore. The fat, known as “bing ro” or 冰肉 in Chinese, is cured in sugar for days. The end result is a piece of transparent meat with a crunchy bite. One popular use of it is as roast meat with chicken’s liver -- with each bite, you would experience three different tastes and textures in one mouthful. 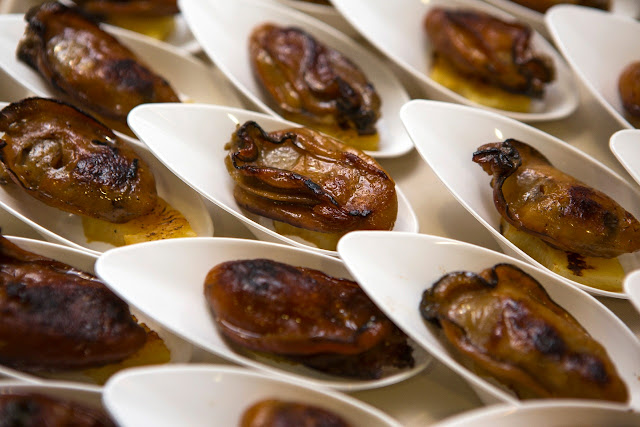 Seared Semi-dried Oyster in Wine/意醋煎干蚝
This method of semi-drying and preserving oysters results in oyster that is half-juicy, yet infused with a flavor far more intense than that of fresh oysters. The oysters would first be steamed in wine, salt and sugar. Once cooked, pan-frying would sear the oyster. I then added some balsamic vinegar to the remaining juice and reduced it. Finally, the oysters were tossed into the reduction for a nice glossy finish. 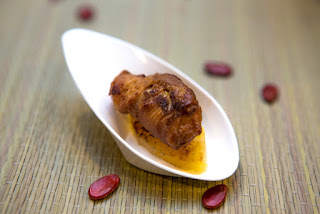 Traditional Meat Roll with Chinese Ham/古式野鸡卷
This dish, which combines ordinary ingredients with intricate skill and technique, has become very hard to find. By transforming simplicity into something to wow the palate, it can be said to embody the spirit of Shunde cuisine. The meat is thinly sliced, then marinated, steamed, and fried. To balance the taste of lard, I have added a slice of caramelized pineapple.

Blanched Fish Soup/鱼边皮蛋汤
This simple bowl of soup is usually served during summer. Its key ingredient is cha gua, 茶瓜 , a preserved vegetable believed to “cool the body” during hot weather. Sadly, this ingredient is quite neglected here. This soup is very “clean”, with a pronounced taste of fish accentuated by cha gua and coriander. Traditionally, the Chinese carp is used, but I have opted for ikan parang, and used the most tender cut of the fish, located just below the dorsal fin. 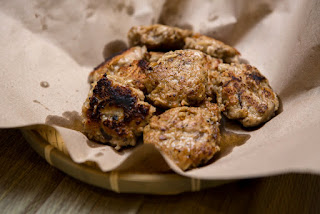 Pan-fried Lotus Root Meat Cake/顺德煎藕饼
Another trait of Shunde style is the ability to come up with “101 ways” to cook banal ingredients in a tasty manner. While lotus root is usually made into soup, here it is shredded and pan-fried into a pancake. The yam in the mixture is a secondary ingredient that offers an additional level of taste. 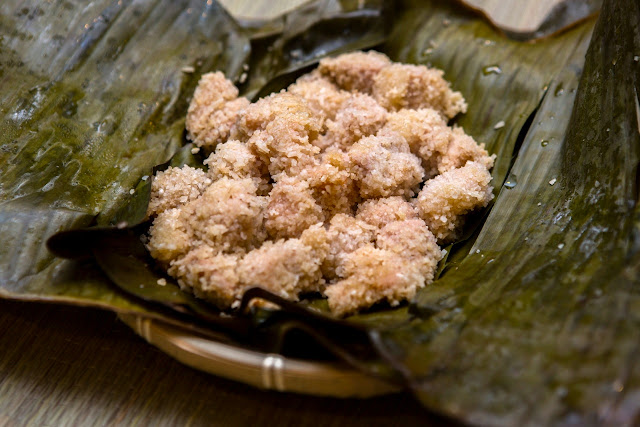 Steamed Pork with Pearl Rice/蕉叶米沙肉
The Jasmine rice that is crushed and added as an additional coating on the pork cubes absorbs the juices and flavors of the meat. By wrapping and steaming in banana leaf (similar to the double-boiled effect), this delicate dish offers up the scent of lotus, the grainy texture of rice, and the succulence of meat cooked to perfection. 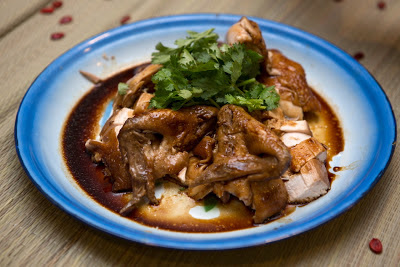 Smoked Chicken in Soy Sauce/色香太爷鸡
This recipe was created by a late-Ching Dynasty scholar, who found himself in dire straits in his autumn years, and cooked this chicken to earn a living. The dish became popular, but as the term “smoked” sounded demeaning in Cantonese, the dish’s name was later changed to reflect its creator’s official appointment at court. While smoking was a common technique in the Zhejiang area, the Cantonese hardly cook using this method. 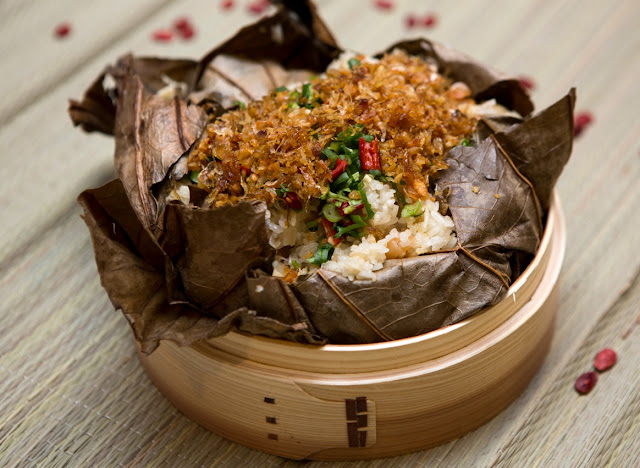 In autumn, Shunde villagers would slaughter their animals and cure and preserve the meat for winter. They would marinate the meat, stuff it into animal’s intestines and hang it in the open field, where the dry North Wind cured the meat quickly without dehydrating it too much. I cured the pork belly myself, burying the meat in coarse salt and leaving it in the fridge for weeks. I picked dried scallops, chicken cubes and dried shrimps – similarly colored ingredients -- to give layers of taste, and a visually “neat” appearance to the dish. Another ingredient was also added: Shunde’s famous preserved radish. 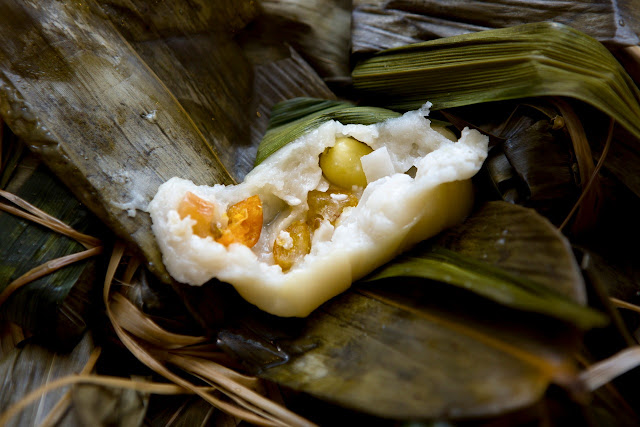 This dessert makes an appearance only at Chinese New Year. Traditionally, glutinous rice cake cakes were steamed with a Ping-po leaf, which is native to Canton. I have replaced it with bamboo leaf, which lends the dessert its own distinctive fragrance. The stuffing is a selection of candied fruits such as tangerine, winter melon, coconut, and lotus seeds, which comes into abundance at this time of year. 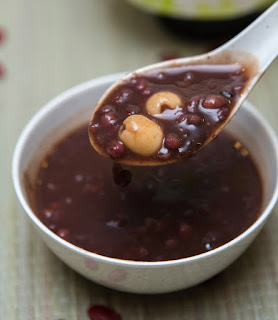 Red Bean Soup with Tangerine Peel/陈皮红豆沙
Although a common Cantonese dessert soup, it is hard to find a good version of it. The beans are boiled under high heat, so that bean and water would emulsify completely. Dried tangerine peel lends a tangy hint. Tangerine peel is ready to be used only after a three-year period of maturing; and the older the peel, the mellower the taste derived from it. In fact, each year of aging seems to add another digit to its price – 50 grams of 50-year-old tangerine peel would easily fetch S$400 and above!

Credits:
Like all great parties, it was a group effort. Special thanks to Bee Bee for the wonderful menu design, Mark for his photographic eye, Jimmy for making my life less stressful, Byron and Grace for the premises, and everyone for chipping in, in one way or other. Not forgetting the two Ss for helping out in the kitchen.

Many of us would be familiar with the black-and-white ‘amahs’ of old. We may have seen them in our youth, or even lived with one in our household. The amahs’ devotion to their employers is legendary; but how many of us know of the cuisine they brought to Singapore -- the cuisine that goes by the name Shunde (pronounced ‘shun-tak’ in Cantonese).

Shunde is located about 30 minutes by train from Guangzhou, on a site that was seabed 5000 years ago. People first settled in the area in the Nanyue Dynasty (BC 203 -110), and they came mostly from Guangdong and Guangxi in China, and Hanoi in Vietnam.

In the Ming Dynasty, Shunde became a prosperous agricultural city known for its lychees and longans. It grew further economically in the Ching Dynasty, when it became renowned as the Silk Capital of Southern China.

In World War II, the town suffered occupation by the Japanese, and its population -- and fortunes -- fell from 0.85 million to 0.37 million.  The city’s inhabitants fled in a mass exodus to Southeast Asia, seeking refuge and a living. The men found jobs mostly in construction sites, while the women became the black-and-white domestic servants – the amahs -- of the rich.

Many famous Cantonese chefs hail from Shunde. In fact, it is believed that Shunde was the precursor of Cantonese cuisine, as the Chinese saying suggests “食在广州，厨出凤城”, (“Eat in Guangzhou from a Shunde kitchen”). Shunde traditional cooking employs diverse and complicated cooking techniques. In the hands of the frugal Shunde people, these skills and techniques have helped to transform mundane ingredients into dishes fit for a king.