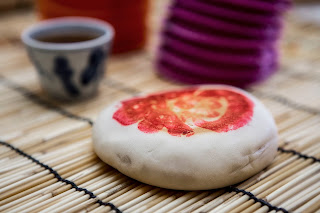 In the past, Hokkien moon cakes came in a box of 63 pieces; and they were called zhuang yuan bing or Scholarly Cakes for an interesting reason. During dynastic times in China, scholars sat for the Imperial Examination to fill administrative positions in the imperial court ranging from the most senior to the most minor. Likewise, the moon cakes in the box were arranged in groups of descending weight and size that corresponded to the actual number of positions in each imperial grade. The largest moon cake could weigh as much as 750 grams.

While anyone would baulk at the thought of wolfing down ¾ of a kilogram of sugared paste and pastry at one go, Hokkien moon cakes were actually made of savory minced meat and candied winter melon. But these moon cakes began to lose popularity after WW II, and their traditional savory fillings gave way to a sweet Teochew-influenced filling of red bean paste cooked in lard. Their appearance – that of a white moon -- remained. 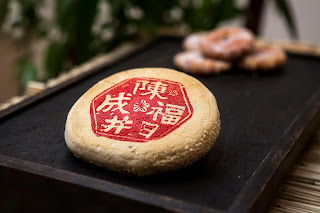 The Tan Hock Seng Cake Shop on Telok Ayer Street was established some 63 years ago. Its current owner, Tan Boon Chai, continues to preserve and perpetuate the traditions of Hokkien-style pastry making, like his father and grandfather before him. The production of the moon cake involves painstaking labor. The dough is thoroughly mixed and kneaded until it turns pure white. The filling is a mix of candied winter melon, candied tangerine peel, melon seeds, sugar and lard. And before baking, additional sesame seeds are sprinkled at the base of the cake to give it a distinctive fragrance.

It is easy to distinguish the Hokkien moon cake: it is the one shaped in a white disc with a red “fu” stamped on it.