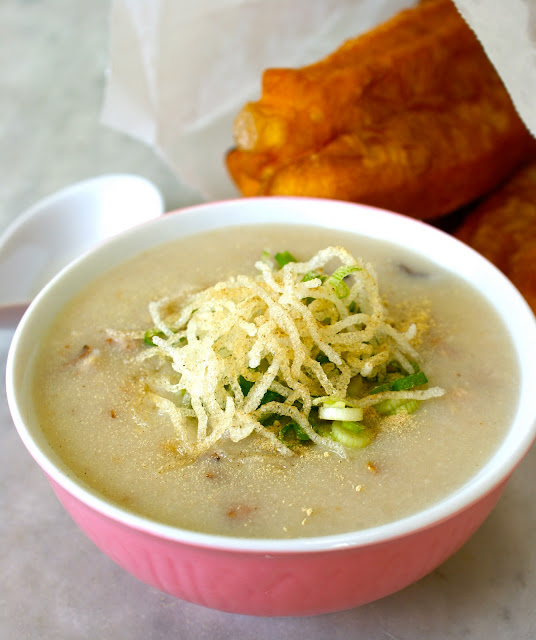 When I was a kid growing up, people would sometimes say they had two ‘mothers’. And everyone knew what they meant.

One mother was, of course, the birth mother; the other was the amah. The ‘amah’, literally ‘mother’ in Chinese, usually came from a tiny village in Canton, a southern province of China, and was easily recognized by her black and white outfit and, often, a long pigtail.

At the turn of the 20th century, many of these women left China for Southeast Asia in the hope of finding work. Uneducated, unskilled, but fiercely loyal, they often ended up as domestic helpers with rich families or in expatriate homes. They cleaned, cooked, washed, and even baby-sat; and it was very common for their employment with a family to start in their late teens or early 20s.

The amah was legendary for her work ethic. Job-hopping or demanding a raise were unheard of; and most amahs stayed with the same family their entire working lives—becoming, in effect, a valued member of their adopted family. They worked extremely hard and sent the bulk of their hard-earned money back home to China. Out of the small stipend they kept for themselves, their famous frugality still enabled them to accumulate savings, and I have heard of amahs offering loans to their employers in times of need!

It was common for the hardy amah to outlive her employers. She would continue to serve the next generation in the family and its children, all the while cementing her status within the family, to the extent that some amahs became de facto family matriarchs, whose opinions were sought, and respected.

There was another side to the amah story. Some of these women from China took a different ‘career path’—as chambermaids in brothels. I knew some of them who worked in the brothels that dotted Keong Siak Street, a well-known red light district in Chinatown until it was cleared for development.

These chambermaids, also dressed in black and white, made good money from the tips given by the ladies of the night and their patrons. True to form, the bulk of these earnings would be sent home; and from what remained these maids would scrape and save for a very special occasion. Every year, during the Seventh Lunar Month, or Hungry Ghost Festival, well-known Cantonese opera troupes from Hong Kong would be invited to perform as part of the festivities. The temporary wooden opera stages would pop up all over Chinatown---and that’s what these chambermaids had been saving up for.

They would splurge on banners festooned with floral designs made up of folded dollar bills. These banners would be given to their favorite performers. I was told that they would sometimes lavish their favorites with jewelry and homemade herbal soups!

Most of these amahs and chambermaids took vows of celibacy; strong bonds of sisterhood developed among them, and they would spend off days together. As they grew old and retired from the brothels or their adopted families, some would return home to China. Most, however, ended up in a room rented with another ‘sister’ or two. There they lived until they were no longer able to take care of themselves, whereupon they would end their days in an old folks’ home.

I knew a couple of these retirees when I was young, and they would spin their tales to me during their leisure hours. Much of their day, however, was spent searching for income to meet daily expenses. The “sisters” I knew would prepare porridge and fried noodles to sell in the neighborhood in the morning; and in the afternoon, they would go around scavenging for cardboard to sell as scrap.

The porridge they prepared was a recipe typical of their hometown in China. In fact, I ate it so often that the particular aroma of the dried sole has become strongly tied to my childhood reminiscences. The dried sole is also often used in Cantonese cooking as a base ingredient for stock. It’s hard to find this porridge in Singapore, but luckily for me, it is quite common in Hong Kong, especially in dim sum restaurants. 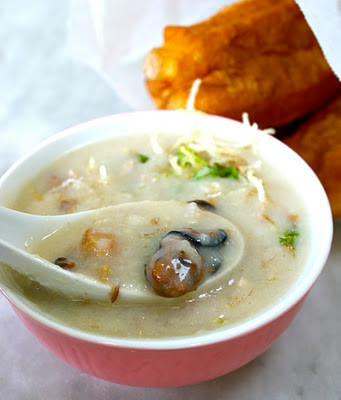 Method:
Posted by Gastronaut at 19:27 No comments: