A Masterclass with Sin Leong

They were known as the “Four Heavenly Kings” of Singapore cuisine. Collectively, they fathered Cantonese food in Singapore as we know it today.

And, if I had any “idols” while growing up as a greedy food-obsessed teenager – it would be these four men.

Masterchefs Tham Yew Kai, Sin Leong, Lau Yoke Pui and Hooi Kok Wai arose from the culinary milieu of 1950s and 60s Singapore, and went on to establish some of the most famous and foundational Chinese restaurants of their generation. The four men met in the 1950s while working in the kitchen of the Cathay Restaurant, at the time the most prestigious fine dining Chinese restaurant in Singapore. The head chef of the restaurant had taken them under his wing; and when he died in 1962, the four left the Cathay and went separate ways. 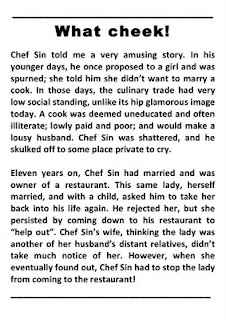 Chefs Tham and Lau founded a small restaurant at Tiong Bahru. Chef Hooi and his wife opened a 20-table restaurant at the Metropole Cinema (the present Fairfield Methodist Church). And Chef Sin started a cooking school in Geylang with his wife.

Even though they were running separate but similar businesses, a brotherly camaraderie prevailed. And the four made it a point not to sell the same dishes so as to minimize competition.

Chefs Tham and Lau have since passed away; but their illustrious legacies live on, and are built upon by their two surviving friends. I’ll give Chef Sin his due in this post, and Chef Hooi his at a later date.

The first business venture of Chef Sin Leong, his cooking school, was located at Lorong 23 in Geylang. Today in his 80s, the chef described how the 20 or so students he taught would surround him closely to observe his cooking demonstrations. He invited some of his friends who were chefs to guest at his school. Among them were a Malay cuisine chef and a Western cuisine chef, and from them, he himself learned the use of spices and the making of sauces. 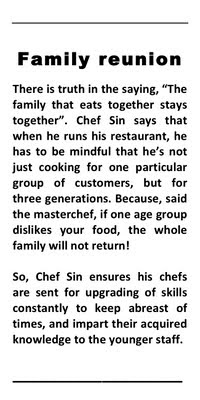 To supplement his earnings, Chef Sin along with two assistants would drive a mobile kitchen, actually a modified van, around the Kallang area where the National Stadium once stood. Eventually a hawker license officer advised him to start a restaurant, and kindly allowed him to apply for the restaurant license after he had got his business going and saved enough money to pay for the license.

The Sin Leong Restaurant was opened in 1965, and by the 1980s had grown to three branches. Among Chef Sin’s famed creations are the USA Duck, Crystal Prawn, and Siamese Chicken.

Needless to say, all the above restaurants were my favorites, growing up. I’ve lost count of the weddings, birthdays, and other celebrations of family, relatives, and friends I’ve attended at these restaurants. Even today, I’d celebrate with Steve whenever there’s an occasion, with Crispy Fried Chicken and Yam Basket at Red Star.

So, imagine my surprise and delight when I bumped into Masterchef Sin Leong himself at Red Star the other day! After a short hello, the sprightly octogenarian spent the next half-hour regaling me with stories of his early career, and sharing precious cooking advice. What a sterling masterclass! Wanting more, I quickly arranged another interview barely 18 hours later. Not at all fazed by the short notice, he presented himself at that interview armed with a sheaf of hand-written notes, and, to my surprise, several dishes that he had prepared himself.

Here are the highlights of the interview:


How Yu Sheng was created in 1964
As they say: this is from the horse’s mouth. Even though the four heavenly kings ran separate businesses, they met frequently. On one such occasion the table talk turned to ways to increase business and revenue during the upcoming Chinese New Year. Chef Hooi and his wife broached the idea of a raw fish dish, as they had observed different versions of raw fish being served when they recently traveled in Malaysia. The Cantonese and Teochew, for instance, served recipes that were very simple in preparation and presentation, they said.

The four agreed a raw fish dish was a good idea. However, theirs had to be much more elaborate in order to command a higher price. And they got to work.

On Chinese New Year 1964, in a smart marketing move, Yu Sheng was launched simultaneously at all the restaurants of the four chefs. However, the initial reaction wasn’t what they had expected – it was lukewarm at best. Some people even hated the dish.

Undeterred, the chefs continued to improve the recipe and to cajole customers, even resorting to giving the dish free to regulars to “educate” them. It took almost six years before the dish finally became a hit. Then the rest of the restaurant bandwagon in Singapore jumped on! But history had been made.

Two classic creations
The oddly-named USA Duck was inspired by a visit Sin Leong made to the US to see his son. When he looked at the frozen duck at American supermarkets, he realized the meat was more tender and lean than the Singapore variety. He introduced USA Duck in 1978, and created a special sauce to complement the crispy duck. The other classic creation of Sin Leong is the Crystal Prawn, which owes its semi-transparent, crunchy texture to a well-guarded and highly skilled cooking technique. These two dishes are served at Red Star Restaurant, which was founded by the four chefs in 1974 at Chin Swee Road.